I played Little Inferno just before Christmas. Like others I found the simplicity of the gameplay a little underwhelming compared with the ingenious developments of previous Kyle Gabler offering, World of Goo; unlike some others I found real depth to the game's fiction. This post is about that.

Little Inferno isn't just a simplistic game of burning amusing objects in different combinations to score points - it's one in a very familiar mould. Perhaps I've been reading too much Plato recently, but that seems to me rather like the point. Let me explain.

I Think Little Inferno is Plato's Allegory of the Cave
In The Republic, Socrates asks his audience to imagine a cave in which slaves are incarcerated. They are held in place by shackles, forced to stare at a wall. Their captors stand behind them, using puppets and firelight to cast shadows onto the wall. All the slaves know of the world are the shadows before them.

Socrates then asks what would happen if one of these people was to be released and allowed to look upon the puppeteers. The slave would be shocked and confused at first; but in time they would come to realise that the shadows were mere illusions, and that the real cause of them was the puppets. Next the freed slave emerges from the cave and, though blinded by the light, learns another level of truth - the puppets were themselves only copies of real animals which the puppeteers were mimicking. Finally the slave looks up at the sun, and realises that every object perceived so far is reliant upon it, both for their continued existence and for the slave's ability to see them.

The idea is that the slave's journey mirrors our own intellectual journeys as human beings. We begin life taking the information from our senses to be the ultimate truth. Some never leave this state. Others look around and realise that there are greater forces at work which themselves explain the information received by our senses. As the slave leaves the cave and witnesses the real world, human beings are able to engage their rational thought and begin reasoning out the truth from the lies. Finally, we are supposed to come upon the ultimate truth, or the Form of the Good, which is analogous to the sun, and represents ultimate enlightenment for Plato. 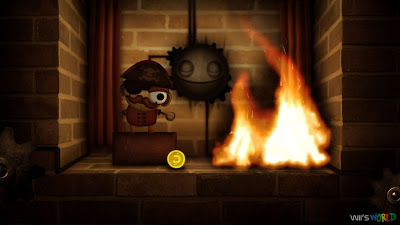 And in the Game
Major plot spoilers from here on out.

Little Inferno sees you play as a faceless, nameless character who stares at a fireplace and burns things. Everything you know about the world is arrived at through letters which are opened in front of the fireplace and then burned. You engage in a repetitive, simplistic activity which - while amusing - is ultimately demeaning. As a player you're engaging in a format designed to waste time; as a character you're burning up all your worldly possessions just to stay warm, all the while being reassured by the manufacturer that what you're doing is fun.

The parallels are pretty thick. As the game progresses your nextdoor neighbour - who so far has only been present in letters - becomes more and more physical. Things she does affect your game and make you aware for the first time that you're not staring at a gameboy screen, you're staring at a wall, in a house, next to another house, in a town... There's a whole world outside this cave!

When the denouement comes it's unexpectedly different to the last 4 hours. Everything you learnt in that time becomes useless in the broader context. Despite never having thought about it before, you learn that those letters were being delivered by a postman/puppeteer you could never actually turn around to see. You're told you can do whatever you like, but that you can never go back. Then the skies clear, the sun comes out, and the weather man takes you up in his balloon to see it all.

The Difference
There's one quite radical difference between Plato's version and Tomorrow Corporation's, which is that Plato's philosopher is supposed - once enlightened - to return to the cave and to govern it using all that acquired wisdom. I suppose in a sense that's what the weather man does, though by blowing up the player character's house the game does rather put an exclamation mark on the no returns policy.

Perhaps the journey depicted here is that of the developers - starting out in the dark, struggling to make ends meet, then joining a huge corporation and finally seeing the light at the end of the tunnel. Perhaps Little Inferno as a product is analogous to the enlightened one returning to the cave and translating their new knowledge into something those still shackled to the wall can understand; or maybe that's going too far.

Perhaps Tomorrow Corporation aren't entirely sold on Plato's metaphysical and political manifesto, and the allegory of the cave is just a resonant metaphor for people waking up and taking charge of their lives instead of wasting them.