So that whole thing happened, and I am still reeling. I've been trying to think of an angle from which to write up the trip, but have failed, so instead you get the pictorial highlights reel. Lucky old you. 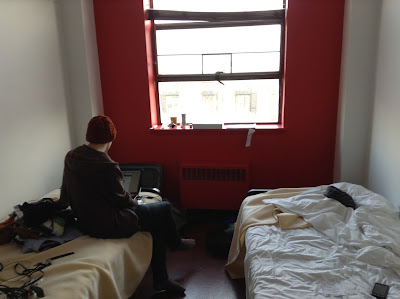 This is our hostel in Boston. It doesn't look it but it was quite luxurious. So much more space in US cities. Also full fried breakfast in the price. Lush. 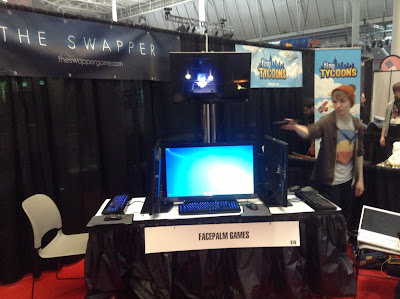 This is our booth. It's got a rather sleeker black vibe going on compared with last year's, and four HD tellies. We were blaring out the trailer on the big screen, but after a while we started hearing the same two lines of dialogue over and over in our dreams and we had to turn the sound down. 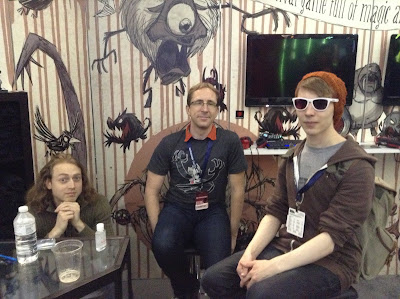 Klei Entertainment are awesome. Play Mark of the Ninja and Don't Starve immediately. As Alia (software engineer, above centre) pointed out to me, they're somewhere in between being a small indie and a pro-developer, and that's a theme that continues throughout the conference. So many people from so many different areas of development all with their own ideas about who's doing important work - and me, somewhere bang in the middle.

PAX was fantastic for us. Quite apart from hanging out with excellent indies like Klei, The Men Who Wear Many Hats, and Blendo Games we secured some lovely coverage for The Swapper. Head to Game Informer, IGN or the New York Post for more.

Also massive props to Kelly and Megabooth for everything and being excellent.

So then we hit San Francisco. Neither Olli (Facepalm Games) nor I had full conference tickets, so this was basically the start of our holiday. I immediately went to Golden Gate Park and was attacked by this gopher thing. 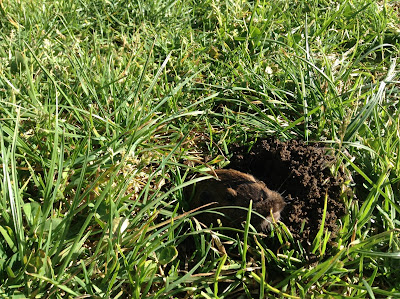 The cab back to the conference hall was surreal. My first time out and about in a city I've written for in a game, and here I am sitting in the back of a cab driving through those iconic streets, listening to a game developer conversation that could have been straight out of the game. I was having fun.

The following days involved avoiding the infamously overcrowded / crap GDC parties, hanging in the indie hostel, and seesawing between horrendously overpriced beers and entirely free ones. The indie hostel was an experience in itself - and entire building taken over by everyone from Zachtronics to Vlambeer. Keeping as I do various fingers in various pies, the whole thing was a slightly different world. Olli knows every game and every person in the room. I can't tell the difference between a student and someone putting out a game everyone else in the room evangelises. At the same time, the writers are a few blocks away on the 40th floor of the Marriott hotel drinking $7.50 beers. I'm getting a bit bored of the stale pizza-by-the-slice, so it's nice to have both options available.

We hit the Humble Bundle party that night, which is a most civilised affair in an old mint building. It of course ends with champagne and scotch being snaffled before the free bar closes, but it's a good crowd, and I manage to pin down John Walker and secure Ir/rational investigator a playtest and some coverage. 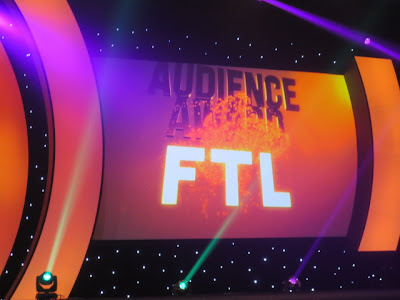 The next thing that happens are the IGF awards, in which FTL is nominated, which seem to take us all by surprise. I find my way to our table and meet Justin's parents and assorted family - there are only four of us who credited on the game, but from what I understand it's very much a group endeavour. I can't imagine bringing my parents to an awards show, but Justin's dad was in the industry, and they are awesome and well into the swing of things. We win three awards, I get up on stage once, look very nervous and forget to thank my girlfriend, then we eat tacos and go to the Steam party. 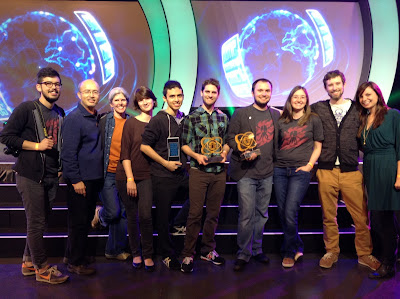 The parties later that night are yet more surreal. We go to the Wild Rumpus, and pretty much everyone I've met in the last week is there, and has been watching the awards. The Subset guys aren't really much part of the indie scene - they're out of AAA, they want to keep their team small, and they want to make the games they love. The limelight is perhaps not their territory. Still, for one night we are minor celebrities. It's quite strange. 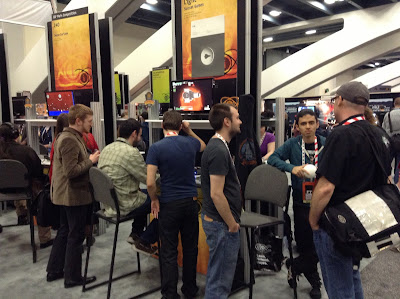 The following day I lend a hand on the booth, which really just involves shaking peoples' hands and awkwardly taking credit for Justin and Matt's work. Everyone's played the game, so they just want to come over and say thanks. I love the picture above, because Justin (2nd from right) and Matt (3rd from right) are talking to a chap who worked on the old X-Wing vs Tie Fighter games, which are one of the guys' core inspirations. For once on this trip they get to be the ones meeting their industry heroes.

It was a thrill to spend time with Subset, with Facepalm, and with all the other devs I met out there. I really am lucky to work on the fantastic games I have done, and there's nothing like seeing a bunch of other people making fantastic stuff to make you want to go home and do some more of your own.

How to Hire a Games Writer

It seems like I've written a bunch of stuff on how to freelance and secure jobs as a writer, but very little about the other side of that equation - how studios can go about finding and selecting writers. If anything it's perhaps the bigger open question of the two.

Writing is still a new and niche enough discipline that a majority of the people who have hired me have been hiring a writer for the very first time - and they sometimes come across me in the most roundabout of ways. So maybe you're a one-man band looking for someone to write some short dialogues; maybe you're a producer on a AAA tasked with finding a narrative designer. Where do you start?

Where to Look for Writers
Most developers probably know and have worked with numerous freelance programmers, artists and musicians - but if you're hiring a writer for the first time, where should you look?

Online Databases
There are a bunch of sites which allow freelancers of all kinds to upload their details for your perusal, like this one. These are often hit and miss - some are out of date, most have no curation, and many still don't have a separate category for writers. Still, they're usually free for everyone, and a LinkedIn search is never a bad idea. You could also check out local writers' guilds, or the IGDA list - but at the end of the day writers have the same problems getting their names in front of you as you do finding theirs because the channels are so niche and distributed.

Recruitment Agencies
Generally recruitment firms aren't setup to deal with contract positions, but they do have large databases, including lots of writers, so it may not hurt to get in touch. There's a cost associated with advertising via a recruitment agency, but you should have the benefit of a wider reach and some degree of curation on the part of the agent. I was actually contacted by Interactive Selection the other week for a full-time position which I seriously considered, and I'd not been on their site in years, so the reach may work for you.

Writers' Agencies
An agent will represent anywhere from a couple to twenty-odd experienced writers - those ont he smaller side are often a small cabal of writers pooling their marketing resources. A good agent will have writers with guaranteed experience on their books, and be able to recommend particular people for particular jobs, provide a team of writers, or give you an opportunity to meet and assess some potentials.

The only agency with which I have any experience - and the only one I'm aware of of its size and experience - is Sidelines. It currently represents 16 writers (myself included), and frankly I was lucky to get in the door with only the Penumbra games when I did, because in their five years' operation the entry requirements have only gotten tougher. An agency will charge a small commission, which generally comes out of the writer's side.

Do Some DIY Headhunting
You might be surprised by how many games are written by freelance writers. While you can rule out a lot of AAA RPGs, games as diverse as Fable, Tomb Raider, Deus Ex and Hitman all involve freelancers one way or another. It can't hurt to get onto MobyGames, find out who did what on a game you reckon, and click through to their bio to see. Any good freelancer should have a few credits to their name and - if they're any kind of marketer - have their details filled out.

Email the IGDA Writers SIG
There are a lot of experienced writers on this list, and there are also also a lot of journalists and students. Treat accordingly.


How to Select a Writer
Once you've got some names in mind, what should you do? First, read this. That'll give you an idea for rates and standard engagements. Next you should get in touch with your shortlist and gauge their interest in the project. If they're game then - unless you've got someone whose previous work you're sure enough of not to bother - I'd suggest constructing and issuing a short writing test. I think out-of-context samples suck (at least watch a video of the game in action), and often enough the samples a writer has to hand will not sell them to their full. Samples tell you what a writer was able to do under different conditions. A bespoke test tells you what they can actually do for your project.

The test should ask the candidate to write according to a brief in keeping with the project, and should test each of the disciplines required for the role (eg dialogue writing, character design, prose, dialogue trees etc). For a short engagement ( less than 10 days), I'd say a few hundred words is reasonable. For a larger project you should probably stretch to a couple of thousand.

There is a general consensus between the agencies and writing guilds that writers should be paid for the time they spend on tests. I suppose there would be. The reality is that we're often not, and personally I will always take the chance to do a test for a game I'm interested in, whether it's paid or not. If you can afford it, or if you're asking for a big chunk of work, or multiple meetings / submissions then we certainly appreciate it. If not then don't let it put you off.

If you're not sure how to go about constructing the test and you don't have another writer on hand to do it for you, either give your candidate what they need to know about the game and let them take the lead (they should be more than capable of doing so) or get in touch with me.

Finally, get experienced second opinions on the tests. If possible meet your candidates in person, or over Skype. Make a call.