So a couple of months back I was approached to write and direct a character trailer to show off the technology and know-how at Cubic Motion, Wave Studios and 3Lateral. The result is due some further polish, but is mostly complete, and is embedded below for anyone interested. 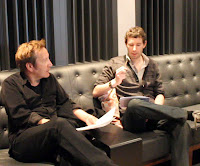 The character was in place before I began, and he's not the sort of chap I would tend to jump at the chance to write for. Let's say he's Binary Domain rather than Penumbra. So the script I produced was in some sense coming from that place. It's about this traditional video game brute who sees and feels threatened by the rise of the more complex, nuanced characters around him. Ultimately he takes comfort in the thought that people like him will always pervade; there will always be room for the big dumb action hero, and provided we have alternatives why on earth would we want things any other way?

There are a couple of audio picks I'm not sure about, but the guys at the various studios involved have turned out a great result. Hope you enjoy it.

Mass Effect 3 vs Skyrim: Worth Writing Home About?

Two rather major RPGs came out in recent months. ME3 I eagerly anticipated, having found No.2 a radical gameplay improvement on the first, but losing all my saves before I finished it. The Elder Scrolls I've always found less love for - its writing, acting and branching is less advanced, and (as has been noted before) it feels like an MMO without the other people. Here's what I think now, having played through a reasonable amount, though not all, of the content in each.