Binary Domain is Out Now! (And This Post is Late)

Very, very late. But anyway, Binary Domain - the new Gears-style shooter from the Yakuza team - is now out for 360, PS3, and has been announced for a PC release later this month. It's a post-apocalyptic robot shooter, with voice communication that lets you boss about and impress/piss off your AI team mates. 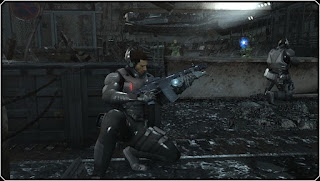 Under direction from Dead Space's Anthony Johnston, and working with a team from Sidelines, I reviewed 5,000 lines of in-game dialogue, rewriting as required. The material was mostly part of the NPC relationship system where the characters harangue the player, and the way he responds affects their standing, and it was nice to take on some interactive dialogue for a change.

I've played through the game (now, sadly not at the time) and I can confirm it probably is indeed a Metacritic 74%. The pew-pew bang-bang is solid, if not a Gears beater, but the game is lifted by its mechanical antagonists. All the robots in the game work according to a consistent armour/electrical underbelly framework where metal plates must be chipped before damage can be wrought, and a full damage localisation system where limbs can be removed tactically. Fast enemies need leg shots (reducing them to crawling or, more sinister, hopping towards you). Score a headshot on a powerful type to destroy their central processor and have them attack their buddies. It's a lot of clean fun.

Beyond this, certainly the narrative co-designed by Anthony and Toshihiro Nagoshi reaches beyond the kill-nasty-aliens plotting of its obvious competition. While the relationship system is somewhat blunt and broken, this is still a game which prioritises story, and it shows in every bit of banter and twist in the tale. This is not to say I'm entirely onboard with the script - we worked hard on eliminating the stereotypes, but this is still a game where characters are projections of their nationality.

All told it was good to be involved, and nice to have another game to add to the growling list.

If you do want to pick up any of my back catalogue you could do worse than hitting these links.

Demos available of most, I believe.

Just to complete this month's run of shameless self-promotion, don't forget you can connect in all these lovely ways: