This is probably the biggest day in my career to date. It's certainly the most exciting. Today I'm announcing (and bringing to Steam Greenlight) Ir/rational Investigator, a commercial follow up to Ir/rational Redux, arriving (with any luck) on iPhone and PC in 2013. 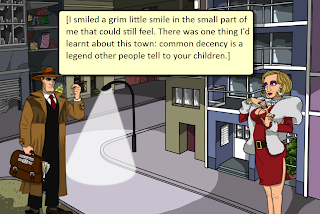 Right now I'm sending out blurb and trying to get the game in front of as many people as possible - in the future I'll be documenting development a bit more and talking candidly about using drag and drop packages to develop for iPhone, the approach we're taking to the story and writing and the perfect storm that allowed us to start work on this game.

In the meantime, for the main info, trailer and screens you can visit Greenlight. I hope you like what you see.
at 10:59 pm 1 comment:

So PAX is disconcertingly lurking just around the corner. I say disconcertingly because I was still writing the script for The Swapper PAX10 demo this morning, because I have no idea what to expect, and because I have a super-cool announcement due to go live right in the middle of it all. To start the week off, though, I'll be having my first face-to-face meeting with the chaps at Facepalm Games when they get off their late flight and come into our shared hostel room in the dead of night. I lead a professional life as ever.

Of course on top of all the work I'm supposed to be doing, there's just far too much awesome stuff going on. I feel like a young girl going to Hollywood. I want to see live HAWP, and the Penny Arcade guys doing their stuff, and Tim Schafer talking Double Fine Adventure, and just about everything else there is to see.

I'll be at PAX Dev from Wednesday, and then manning The Swapper booth Friday - Sunday. I cannot wait. If you're at the show, do swing by and say hello - and if all goes to plan check back here on Friday, 31st August for an announcement about which I'm very very excited.
at 4:32 pm No comments:

Email ThisBlogThis!Share to TwitterShare to FacebookShare to Pinterest
Labels: appearence, the swapper

Conker's Bad Fur Day both fell foul of that particular fact, and embodied it. One of the very last games to be released on the N64, it looked for all the world like the last of the old guard Nintendo platformers. In 2001 we were beginning to move beyond the cartoon simplicity that had satisfied us for so long - more adult, and lavishly detailed experiences like Silent Hill were drawing audiences away from the Gamecube and toward the PS2 - and Conker languished in the purgatory between hardware cycles. It sold 55,000 copies. 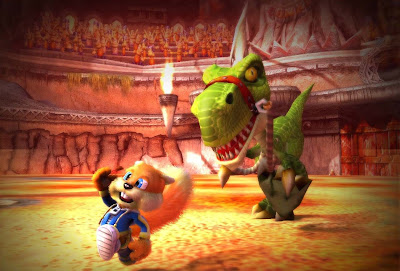 But Conker was a sign of things to come. It played like any other Rare platformer (and, I'd say, was the best of the lot at just that), but it was radically different in tone and style. It was rude. It was self-referential. It took the piss out of games, films and itself in equal measure. In short - it was way ahead of its time.

FRANKY
I is gonna stick my big fork right in your ass!

CONKER
Were you parents related? Like before they were married?

The game follows Conker who, after a particularly heavy night on the town, winds up on a fateful trajectory that will see him become the King of the Land. While that story sees him do all the usual things - collect keys, jump on bad guys, solve puzzles - his priorities throughout have more in common with those of Animal House than Banjo or Diddy Kong. Conker would fuck those guys up. He might even wave his squirrel bits at them. 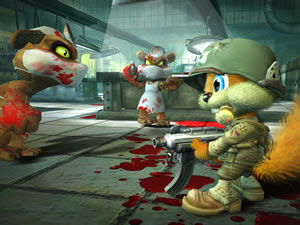 Throughout the game you can just feel the guys at Rare letting loose with not only their many years' experience with the genre, but their love for it. Of course, this is also the last cute-animal-platformer Rare released on console (barring re-releases and the construction-focused Nuts & Bolts) and so it's most interesting to observe the criticism of the form that's ever-present in Conker. From keys that refuse to be collected to boss battles that are literally the crappiest part of the game, there was a sense that Rare was looking to what games were going to become rather than what they'd always been content to be. Their switch from Nintendo to Microsoft came one year later.

Looking at the game today, it's not quite as sharp as it once was, because Conker was one of the first AAA games to try to break out from being just the sum of its parts. It suffers because we've gotten so much better at doing that. This said, it's still a game which chooses to, at one point, put a cartoon squirrel in the middle of an animal-based Omaha beach landing. It's still a game where the princess, instead of baking you a cake, calls you on your cell and gives you shit for not coming home, before donning leather and joining you in a Matrix-inspired lobby shootout.

Better, the Xbox remake still looks fantastic. If you've got one in the cupboard / are of an emulation disposition then I'd unconditionally recommend you play it. It's a vital and always entertaining part of history that only 55,000 other people have shared.
at 2:53 pm 4 comments:

I'm on the Unlimited Hyperbole Podcast

This week another brave soul has sat me down for an hour and grilled me - this time it was Joe Martin's turn.

The topic of this season's Unlimited Hyperbole is horror in games, and Joe's cut down about 60 minutes of me going on about just about anything, to just over ten minutes of fairly sensible chat about the development ethos on Penumbra, my favourite horror game (L4D2), and what I'd like to be doing with interactive narrative (more and less at the same time).