How Video Games Will Destroy Humanity 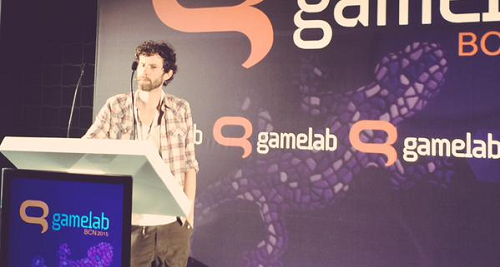 Recently I gave a little talk to games dev audiences at Subotron in Vienna, and Gamelab in Barcelona. The idea of the talk was to first establish some strong design rules I learnt from authors like Terry Pratchett and George Orwell - keep it simple, make it speak - and then to develop a science fiction world using those principles which might form the basis of a future game. As I did this I realised that video games were going to destroy humanity.

For those that requested it, here are the notes and attached powerpoint. For those that didn't request it, feel free to take a look, but note it's probably better live.

Rather than try to put into words how excited I am to sign onto another innovative new project, I will simply invite you to have a play of Subnautica if you haven't, and then ask you to enjoy with me a restrained mutual fist pump. Yes.

Subnautica, like FTL, is one of those games I loved so much as a player I just had to get in touch and see if there was something I could help out with. Much as I dislike the market pressures early access puts on consumers to purchase unfinished product, it certainly has its advantages.

Subnautica beguiles me so for two reasons. First, it is a non-violent, open-world exploration / survival game. While I've done a bunch of non-violent things in the past, it is great to be able to start 'specialising' in it, but it's the openness of the world that really holds the potential for me. My entire career I have wanted to explore ways of telling story that are not just audio logs, cut scenes and dialog trees - or at least be ambitious with how I apply those techniques. Subnautica offers a whole new palette.

Second, Subnautica's world is without parallel. Aesthetically speaking, where The Swapper lacked visual definition, and Talos had too much of it (for my personal liking), Subnautica's slightly exaggerated first-person world is hugely to my taste. It is colourful, immediate and intriguing, and its science fiction provides lots of opportunities to build on that world.

Subnautica's gameplay is about exploring and surviving on an alien world, and learning how to live harmoniously with your environment. That is literally what you do minute-to-minute. The story, then, is going to be about concepts quite alien to video game narratives in general: survival, environmentalism, life itself. I think these are topics which I can do justice to.

Now, what's the lay of the land, and what are we going to do?

To date there has been some initial story development at the studio, and early access players will already be familiar with the established backstory: you're on a space ship, it crash lands on an ocean planet, find out what happened and get home. Most of the gameplay systems are implemented, along with over half of the world map, but there is a way to go yet with original content creation before moving into polish stage.

Since this is early access, we are not taking the front-loaded approach I usually take, where we spend half the budget on pre-production planning before writing a single word. Instead we're firing multiple cylinders at once. Right now I am working directly with Charlie (Cleveland, Unknown Worlds' founder and creative director) to nail down some of the big outstanding questions about the story. Who is the player character? How do we deliver lore and story in-game? What crashed the ship?

At the same time I am developing plot pitches so that soon enough we will have a firm idea of what actually happens at the end - and of course what happens after that, since in a game like this there is no end.

Finally I am developing in parallel a practical in-game script for the first 40 minutes or so of gameplay, potentially to include in a future game update as a way to test the water for the direction we're taking, and share some of our work with the players.

If you want to follow development there will doubtless by story tasks added to the Subnautica Trello, once my workflow within the team is a bit more established. If you want to play the Early Access (it's in very playable state, save for a bit of stuttering) it's £14.99 from Steam.