What Would You Ask Chris Avellone If You Had the Chance?

Because we do! I met Chris here in London the other night which - apart from being quite surreal (Planescape is like the bible around here) - gave me the opportunity to flagrantly abuse my position and tie him into an interview.

I'll be firing some questions at him tomorrow. If there's something you want to know, put it here.
at 1:13 pm 2 comments:

Mark of the Ninja
Another Klei title? Definitely. Mark the Ninja, as he is called by sensible people, has an excellent stealth game built around him. While we seem to be rather spoilt for indie stealth titles at the moment (Monaco, Gunpoint, The Swindle...), Mark stands out for being a purer implementation of the ideal, for being rather more substantial in terms of content, and for actually being released. There's also a story packed in there with a fun twist, though it's perhaps not what you'll really be savouring.

Also I was reminded in San Francisco that Klei started out with Eets, which I recall from a long lost era when indie games weren't so much of a thing, and which I'm told was the first indie game ever on Steam, which is pretty weird to think about.

Monaco
I really wasn't sure I was going to like Monaco. A quick play at PAX last year only exposed me to the quick-fire chaos of a noob game, and I didn't want arcade, I wanted stealth. Turns out it's my favourite game of the year so far. 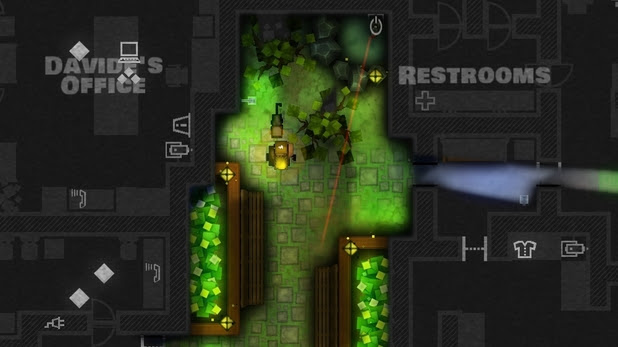 The devs are right when they say whatever game you want from Monaco is in there somewhere. Soloing each level, taking it slow and methodical, is possible and highly rewarding, but playing with a reasonably experienced team is even more so. It's amazing how quickly you get comfortable enough with the mechanics to start improvising on the move.

Monaco is a brilliant co-operative stealth game that is worth every single penny, and that's all I'm going to say about it. Oh, and the map editor is coming out soon, apparently, out now in beta, and I am excited. have made a level.

The Walking Dead
And finally, because I'm super lazy and want to go play Don't Starve / read about political justifications for environmentalism / have a smoke / write a Swapper post-mortem... I will simply say: play The Walking Dead. It is amazing, there is new DLC coming out, and I will be surprised if it doesn't take the Writers' Guild of Great Britain Award this year. Oh, and the first episode is free on iPad. Boom.

Email ThisBlogThis!Share to TwitterShare to FacebookShare to Pinterest
Labels: massive love, worth writing home about

The Swapper Sort of Postmortem & Game Key Give Away!

That's what I felt when the first review came in. Admittedly we'd had some indication from the press that The Swapper's reception would be warm, but I don't believe anything until it's in front of me, hence the non-committal tone of the pre-release post.

As it turns out, things went well. In fact, I think we've all been blown away by the game's reception, and by the fact that everyone is now paying their bills. Certainly I have never read kinder words about my work, and I'm thrilled that it's on a game I was so heavily involved with, and which reflects my particular philosophical passions so well.

So I was going to write this piece as a sort of round-up of some of the criticisms made in reviews, and look for where we went wrong. I'm certain there are places that we went wrong, but it seems the reviews are not going to tell us where. Instead I'll just delay it by telling you about some of the nice post-release stuff we've got going on.

First off, the Steam forums have developed into an active little community:

Second off, I have two Steam codes for The Swapper to give away. Would you like one? If so, write your most convincing three word argument for the existence of god in the comments and check back in about 5 days. The two I like the most will earn themselves a Swapper key!

Finally, expect a fuller analysis of what we did in the game, why, and how we could have done it better at some point soon.
at 12:55 pm 13 comments:

There was a time on this blog when I did previews and recommended games and things, and that time is returning... NOW! I've been stuck in exams and The Swapper crunch for the last month or three, but no longer.

Every week I play games that are worth writing about. I rarely actually write because the internet is full of such things, and actually lists are a bit time consuming to write; but it is worth doing if even one person comes here and is sold on a game they'd not gotten around to yet, so here we go. These are the games that stirred that childhood emotion inside me of wonder and delight over the last year.

XCOM: Enemy Unknown
My word does XCOM make me realise how much TBS fans have been hard done by over the past decade, and how glad I am those days are over. Frozen Synapse reinvigorated my interest in the genre, and games like Memoir '44, Hero Academy and Rad Soldiers have been sustaining it. XCOM well and truly sates it.

It's hard not to admit that a big part of XCOM's appeal is in the looks (especially with the HD mods). The cover system is similar in function to Rad Soldiers' (though far more nuanced than), but seeing your people actually dashing for cover in roadie-cam, being pinned down by suppressing fire and shying away from incoming fire actually makes me feel like a commander. Sure the animation and clipping is still seriously rough really quite frequently, but who cares?

The meta-game deserves mention as well. While it's not as involved as the classics, it does a decent enough job of representing to you the global view, and the dramatic progress that you're making. I love the X-Com experience more than anything because it's holistic: I don't feel like I'm playing a game, I feel like I'm defending the world from aliens.

Don't Starve
If I'm honest, I've not booted Don't Starve since it officially released. It hit that point for me where I hadn't played in a while, and I couldn't bring myself to make the reinvestment in the perma-death only to starve gruesomely yet again. Don't Starve, it's true, has a bunch of features that distance me from it. There's not enough hand-holding for me - I like feedback from a game that I'm doing something significant, even if it's only a few lines of text. There's a bit of grind in the Minecraft-y elements as well, and frankly clicking on tiles all day so I can make my garden more aesthetically pleasing isn't the sort of activity I'm ever likely to engage in voluntarily. 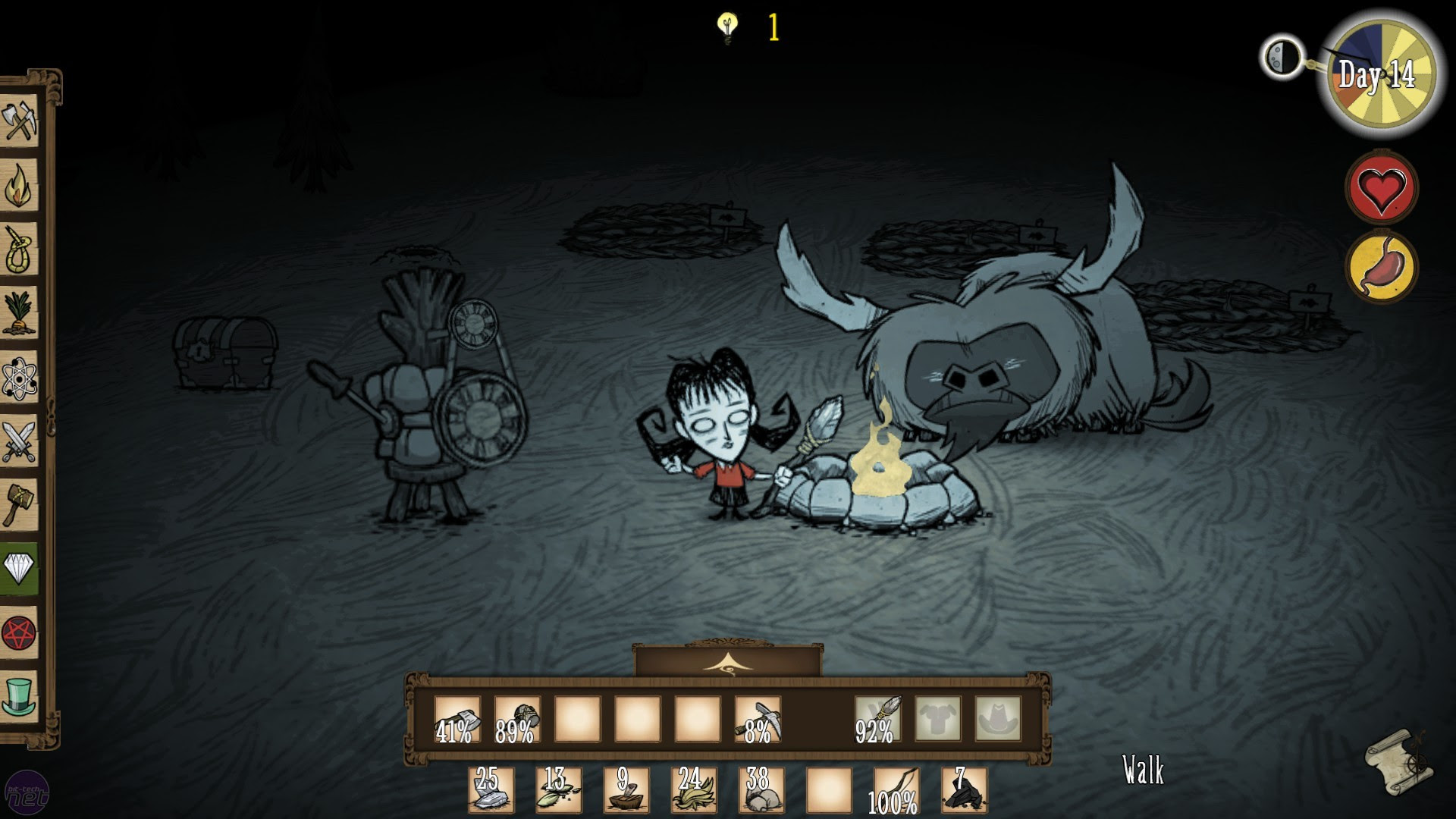 None of this is to say I didn't thoroughly enjoy the hours I put in during the beta. I love Don't Starve because it's one of the best survival games I've played. I love dynamic systems, I love fleshed out worlds, and Don't Starve's nightmare wilderness is at once fascinating, fluid and convincing.

Journey
Quite apart from its lovely aesthetic, Journey was an important game for me for its 'co-op'. By eliminating almost all interaction, and then placing players in that beautiful, ever shifting desert Journey achieves that most difficult of goals: it takes the general awfulness of people on the internet and turns it into something wonderful. Okay, perhaps the way I've described this makes Journey a sort of lobotomy: take all the tools away from people and they've got no choice but to be nice; but play through the game to the end with someone you'll never know and tell me you didn't appreciate it.