The latter is a new top-down tactical game from Blendo Games, the developer behind the excellent space opera, Flotilla. Hundreds of pixelated zombies flood a cityscape, and using an assortment of helicopters, infantry, mines and artillery you have to evacuate the civies and ideally wipe out the hordes before nightfall - battles knitting into a cursory campaign map overlay. It's a smart system that encourages all those heroic last ditch rescue attempts and frantic fighting across town, and the scale - which must see close to 1,000 pixel zombies, scientists, peds and mega zeds in play at times - is gratifying. 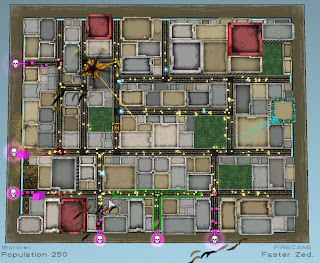 There's only skirmish mode available here, but it's given some life by the comic 'vignettes' delivered at random between play cycles (as pictured in the header). The story takes place in 1960s Latin America, but the whole thing exists in the Blendoverse, the same universe as Flotilla - a universe where people drink vodkahol, think they're descended from aliens, and are pillaged by space crocodiles. It's constantly familiar, yet bonkers.


One summer, a very young Tabajaras shaves the fur off one side of his cat. "Now Peachie can sleep on the hairy side when he's hot, and flip around when he's cold."

The cool thing about these vignettes is that save for the prologue and epilogue they're delivered at random. You end up filling in gaps as you go along (so that's why he's steaming out into the desert looking for his t-shirt), and the plot covers multiple characters connected in some way to an uprising and a scrabble over a national defence program, all in the midst of an incoming zombie-based catastrophe. By the time all the pieces are collected the threads have... mostly come together. They're amusing and, incidentally, entirely modable: 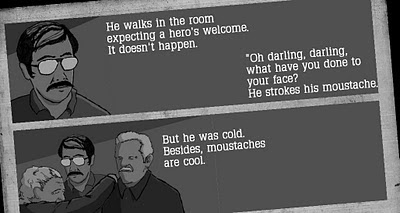 So for all of Crysis's bells and whistles - and for all the times AZS comes dangerously close to being a tower defence game - it's still the latter that's done more for me. 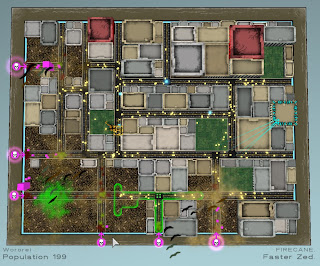 There are problems you'll have to be prepared to look past. This very much feels like a Beta release: there are no auto setup options so you'll be doing a lot of the same routines over and over, the tutorial text never seems to go away, you have no control over your troop roster, and the balancing is all over the place (a levelled up artillery gun can win pretty much anything). The scenarios also lack visual and tactical variation - the same old buildings and street layouts rejigged for every mission. An international level pack would make this an altogether different offering.

And, yup, this has officially turned into a review.

The game seems to know it's a one-off strategy blast - the vignettes will keep coming fresh until about 5+ hours in, around the length of a long skirmish campaign. It's a shame the £6.99 price point lets it get away with this - there are lots of fun, underdeveloped strategy games on the market, but I'd have loved to see a more fleshed out vision of this.
at 3:59 pm