Why is SWAT 4 the singleplayer game I've replayed more than any other (ie three times)? Why does it still give me the warm sense that something somewhere is right in the world (or at least was back in 2005)? Why this despite the fact my men are unable to equip anything more lethal than a paintball gun?

At the core of SWAT 4 is as rigorously designed a gameloop as you'll ever come across. Enter a plausibly detailed, open layout environment (anywhere from a petrol station to a halfway house to someone's house) with your four AI squaddies. Find a door, check what's on the other side with the look-under-the-door / magic wand gizmo, choose an appropriate tactic and storm in. Kill/arrest baddies, secure civvies and weapons, report status, rinse repeat.

The game gets a few key things really right.

Sense of Place
I enter the dining room in the halfway house. It's a large, open hall designed to feed people en masse; I have good visibility compared to the segregated cubicles of the office building I've come from, but the size of the room means a single grenade won't cut it. I order Blue team to breach from the other entry point to cover more ground.

I love games that make me feel like I'm in a real place that affects the way I play, rather than just a series of room and corridors with different body paint to run through. Think Hitman, think Thief, think Project IGI. SWAT 4 gets half of this right - while an office block doesn't make gas grenades any less effective, we are at least encouraged to take the context onboard and appreciate the bubble narrative of each level. From mission briefings and 911 calls to believable level geometry and visual detail, Irrational did their utmost to bring you into the gameworld in a way far more effective (for me) than a Half-Life 2 or Deux Ex 3. These are all locations we're familiar with and - to a degree - predict; they feel like part of a larger world rather than a themed rollercoaster, and for SWAT that's all important.


Sense of Role
The team bursts into the dining room, the pointman reporting one armed suspect and one civilian. The suspect stares at us in shock, his weapon resting uneasily by his side. I scream at him to drop the weapon, knowing I'm the only one with an itchy enough trigger finger to pop him before he poses a threat. He drops the gun, goes to kneel down, then draws a sidearm. I shoot him in the face, which spooks the hostage, and I'm forced to have my team subdue her. Situation under control I have them both arrested and report the outcome to TOC.

SWAT 4 is, I can only assume, not very realistic in any sense but the aesthetic. This being said, it remains more realistic-feeling than just about any military shooter bar some of the older OpFlashes and Rainbow Sixes. The challenge in SWAT (at difficulties beyond normal) is not to kill all the baddies - that's easy - it's to follow procedure without letting procedure get in the way of killing the baddies. It's not quite the way it's presented, but effectively you start out with 100 points, and they're detracted for every red tape slip up.

Kill a guy when you could have arrested him: -2 points
Fail to secure a weapon or report a kill/arrest/casualty: -2 points
Shoot a guy who didn't point his gun at you: -5 points
Execute an arrested criminal: -10 points
Execute one of your teammates (even by accident): death by impromptu firing squad

It sounds petty, and it can be, particularly when the game's age (and that period's lesser focus on accessibility) sees your final objective being to rescour an empty level looking for the one handgun you forgot to collect. For the most part, though, it's a stern reminder that you're not a lawless one man army. You're a guy (a faceless, characterless guy, but a guy nonetheless) with a boss, and a job, and the expectations that come with. It feels like I'm part of a system rather than the one guy allowed to break it. That's a good thing, even if it means I have to arm my chaps with paintball guns to stop them killing dudes. 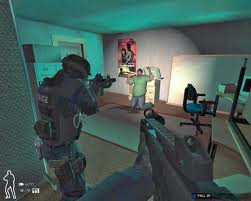 I stack my men up on the next door and order a breach, bang & clear. Red One opens the door and Red Two slings a flashbang. I call up the Blue One camera and watch from first person as he makes entry and scans the room, Blue Two passing his peripheral as he heads in deeper.

SWAT 4's gameloop is, ultimately, about assessing your situation, selecting tactics, breaching a room and then making a series of quick-fire decisions. This is all supported by a remarkably intuitive order system that allows quick and (when the AI isn't getting all 2005 on your arse) effective coordination of your team that's further strengthened by the animation. It's indescribably satisfying to watch the fluid machine of your squad in motion.

Truth is, tactics are more limited than they appear. The differences between the flash, gas and pellet grenades is rarely vital (are the threats wearing gas masks? is there clear line of sight?), pincer moves are often more dangerous than single attacks, and additional flavours like pre-mission loadouts and entry points similarly cursory. The combination, though, is palpable. Just like the original, top down Rainbow Six, there's the sense of a well-ordered plan that could go wrong at any moment, and an excruciating tension. The latter is, if anything, only added to by the knowledge that hearing your guys yelling to "Get down!" means there's a 50:50 chance their overly steady trigger fingers will be slower than the suspects'; unless, that is, you can get there in time. In fact, unless grenades are wisely used in incapacitating your foes your four-strong team is easily matched by a single aggressive crim.


All Told
I stack my team up on the door and loop around to the connecting room; anyone in this second room could easily avoid a grenade blast and flank my chaps. I signal them to go, hear the bang, and make entry myself. I blast open the door and come face to face with a perp. In my panic I shoot him in the face, as I am prone to do. Oh spacial awareness, you've bitten me again: there's one fewer room between me and my guys than I figured. As the perp falls I consider how strangely well equipped he is. By the time he lands I realise it's Red One. I eyeball the rest of my team and hammer the 'F' key to report a man down, and then hammer it some more in the hope its contextual function can also handle "Guys, it was a mistake, I'm sorry!" Someone, that uppity bastard Blue Two, I think, yells, "We've got a traitor!" and everyone shoots me. As the screen fades I hear Blue Two report to TOC that the "Situation is under control."

SWAT 4 is a game that tells engaging stories without the schoolboy reliance on a grand overarching narrative. Who says games should be about a ten hour story and not ten one hour ones? It's a game that intelligently combines scripted narrative (in the mission briefings and level layouts) with procedural content (in the random enemy positions and emergent scenarios), and presents it all through gameplay that reflects the both.

SWAT 4 is my favourite Irrational game. I can think of few higher complements than that.
at 8:47 pm