This is the second half of my post-PAX report. You can find the first half here.

Saturday - PAX Day 2
Saturday is the big day. That's the word going around the stands. The word is not wrong. Everyone is here. Surreal experience of the day goes to a certain gaming website that conducts a video interview. The interview is with their dolled up female presenter, who has the questions fed to her by the sweaty chap behind her. Perhaps she knows loads about games, perhaps the PAX10 is just not her area of expertise - but I worry the real reason she's being fed the lines is that the website thinks gamers are really here for the T&A. They won't be satisfied by thorough journalism! No, they want boobs!

Aside from this, I have a chance to check out some of the other games in detail, and am consistently thrilled to be sharing our part of the room with some of the most cutting-edge indies on the planet. A few stand out for me.

Octodad is a charming adventure game where you manipulate objects in 3D space not unlike (though rather better than) the interaction system in Penumbra. The physics gameplay is different and engaging, but it's the character and the potential of the adventure that excites me. 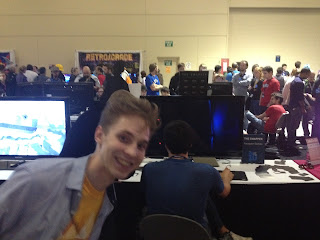 The Bridge I only play for ten minutes at the start of the day, but being set up nextdoor to us I'm watching it out the corner of my eye all day. If anything it gets slightly more 'Wow, that game is beautiful' comments than we do. We hang out with the game's developer, Ty Taylor, for most of the rest of the show and try to learn his secrets.

I'm also looking forward to playing Monaco, but that dream is quickly replaced by another - to play Brendon Chung's surreal, first-person stealth hack-em-up, Quadrilateral Cowboy. I've long been a fan of Blendo's games (Flotilla in particular) and Cowboy is by far my Most Must Have of the Show. It looks like Gravity Bone or 30 Flights of Loving, and plays like a surreal cross between Hitman and Uplink. Look at your map, find the infiltration points, complete your mission and get out. The twist is that every element in the game aside from movement is controlled via a command prompt on your in-game laptop, and success requires crafty coding and perfect timing. The game, for me, seems to be about establishing a limited but consistent set of rules, and then letting the player work everything else out. It's gorgeous, it's engaging, it's smart and it's fresh. Highlight? Pushing my beetle-like robot through a small hatch, testing the robot controls until I find the one for 'Jump', then watching through the glass window as the thing hops comically across the room and lands on the documents I need.

I had a chance to talk to Brendon later in the show, and I'll have the interview up in the coming weeks.

By the time the expo floor closes I'm doing my best to rally the indies to a single pub. This turns out to be far more than I can chew, and we end up going with Cypher Prime (Splice), Ty (The Bridge), Mango Down (Catch-22) and some others to a beer house round the corner, and then to the sitting-room-only pub where my bouncer story goes down. We bump into the Gearbox team, I get a bit drunk and rant-y about war games and bringing in writers who know nothing about games, and then we all get a bit more drunk and go to a club that closes at 1:30am because Seattle has backwards drinking laws (Olli, my boss, has already had to go home because he's 20).


Sunday - PAX Day 3
By midday on the last day I'm chest-deep in PAX-Pox - the generic flu thing that 80,000 gamers from all over the country import to Seattle each year - but I'm still finding new bits of the show, like the entire floor of PCs, or the competitive gaming. I head to the Penny Arcade Q&A and feel like what I'd guess a non-gamer must feel like walking into PAX - all the talk is around PA in-jokes and tabletop gaming, and it becomes clear to me just how vast Penny Arcade now is.

Otto and I also go to the Eric Wolpaw and Tim Schafer writing talk. They are excellent and funny, but something stands out. When asked how he'd deliver an engaging experience through mechanics alone, without the use of pre-authored narrative, Tim was nonplussed - if there's no author's hand at work, he says, how can we connect and communicate anything? I don't think I was the only person in the crowd who disagreed, and I'm sure on consideration he might redress that view, but the point was made - small studios are still where it's at if you want to do new things.

Once the show clears up I hook up with Brendon, Zach et al and head out for dinner. It's an absolute thrill to spend time with some of the devs I've most respected over the years, and it's over all too quickly. Once they shoot off I join Olli and Otto at the Indie Megabooth after-party at an Irish pub downtown. I meet a crazy man who works on a submarine, talk efficient cut scene narrative with Olli and Ty, and generally wind down. The boys have to shoot off to the airport around 1am, and I'm due to fly home tomorrow afternoon. 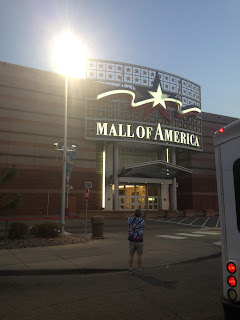 My flight out of Seattle, of course, is delayed by a couple of hours, meaning I miss my connection and spend 24 hours in Minneapolis. Everyone at the airline keeps apologising, but while I would have liked to get home it does mean I get at least one day of sight-seeing in the US - and on the airline's money too. I arrive at the rather nice hotel, order two pints of beer in plastic cups because it's 11pm and the bar's closing, hook up with a couple I meet outside who happen to have come from a tabletop convention, and we drive to TGI Fridays, which we're told is the only local bar still open.

The next day I go to the only tourist attraction within walking distance (and it takes quite some convincing for the hotel staff to let me turn down their free shuttle) - the biggest mall in America. The advertising is not inaccurate  There is an entire indoor theme park in the middle of the thing. I eat the local speciality (beef burger stuffed with American cheese), having failed to convince them to serve it anything other than well-done. I sample about 20 chilli sauces. I get on Facebook and complete dares set by my flatmates. Then I head to the airport, spend my $12 airline meal vouchers on the largest McDonalds meal money can buy (only $7, but HUGE) and settle in for the long flight home.

PAX was eye-opening for me. Sitting at home most days turning out script I'm somewhat cut off from video game culture. I don't know who plays my games, or why they like them, if they do. I aimed to spend PAX networking with the big boys, but instead I was drawn, at every moment, towards the indies. I've no great passion for cosplay or the latest wargame or having a mohawk shaved into my head so I can skip the Far Cry 3 queue. This, quite obviously in retrospect, puts me in a rather small minority at PAX.

What was great about the show was that I never felt that way. Hanging out with the indies, learning what people think of our game, and being re-enthused to develop ground-breaking product was what PAX was about for me - and it delivered in spades.
at 2:32 pm