Richard Dansky is the Manager of Design at Red Storm Entertainment and the Central Clancy Writer for Ubisoft. You can hit him up at www.richarddansky.com.
Awaking one morning, you discover a rogue worm hole swirling about where your sock drawer used to be. The vortex begins to expand, and you realise you have only limited time before you're sucked in. With no idea what's on the other side, and being the conscientious sort, you decide to pack some essentials. Shunning supplies, goods for trading and fears of personal safety, you bundle up your games systems of choice and that handy inexhaustible power supply you picked up at a car-boot sale last Thursday.
As you stare at your games collection, you first make a grab for a game that could, if necessary, entertain you for the rest of your life.
Ignoring the critics and the agonized howls of my thumbs, I reach for Dynasty Warriors V. For all of its faults and what may be a lack of ambition, what it does – make you feel powerful – it does extremely well. There's enough unlocking to keep my inner obsessive-compulsive satisfied for a good long time, and besides, I could never get tired of listening to Wei Yan's Cookie-Monster-gone-berserk dialogue.
Reaching for a second box, you make sure to select the one game you hold most dear.
Into the bag goes the Ghost Recon Gold Pack, complete with Island Thunder and Desert Siege mission packs. I'm a huge fan of the original Ghost Recon's gameplay, the mix of tactical puzzle and FPS action, and I very much enjoyed getting to play with its dynamics in designing the mission packs. The trick, of course, will be ignoring the frantic campaigning from Splinter Cell: Conviction as I make the selection of GR, and making sure that Sam Fisher hasn't somehow managed to infiltrate the bag when I wasn't looking.
Realising you have time to collect some more cases, you pack up the game you think best to represent gaming to whoever you might find on the other side of the worm hole.
I'd snag a copy of Civilization. For my mind, it's still the finest example of the gaming loop out there, and the most addictive. And really, if I'm going to show anyone what gaming is about, the game that produced more cries of "just one more turn!" than any other seems like the way to go. 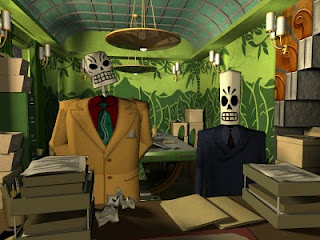 As the space in your bag diminishes – and you begin to wish real-world bags were as large as they are in RPGs – you prioritise the title that's been most influential in your career.
That's where Grim Fandango goes into the bag. Playing a Tim Schafer game is an education in game writing, and Grim Fandango was the first one I stumbled across when I moved from tabletop RPGs to video games. Just seeing how he worked the economy of language while still providing deep characterization gave me something to aim for in my own work.
As the vortex continues to grow it begins to eat into your desk. Teetering on the edge is a game box. Frantically, you smash open the case, and snap the disc in two – this is the game so bad you can't risk it coming with you.
I'm a firm believer in the notion that no game is so bad that you can't learn something from it, even as a negative example, but Ultimate Civil War Battles' only redeeming quality is the fact that the disc could potentially be used to decapitate a zombie chipmunk, Sean of the Dead-style. I don't demand much from my Civil War strategy games, but I do expect them to get straight which side was which. So I snap it in half, then I snap the halves in half, then I snap those in thirds before proceeding to jump up and down on the sparkly fragments. After all, you can never be too sure.
Finally, your bags are full – admittedly that's mostly due to the space taken up by the inexhaustible power supply. The vortex swallows you up, and you're deposited heavily on the ground, just beside a familiar looking sock drawer and not an awful lot else. Let's hope you chose wisely.
Selected Softography
Splinter Cell: Conviction
Ghost Recon: Island Thunder
Rainbow Six 3
Rainbow Six: Black Arrow
Far Cry
Cold Fear
Dark Messiah of Might & Magic
Blazing Angels: Secret Missions of World War II
Studio / Career History
White Wolf Game Studios – Developer – 1995-1999
Red Storm/Ubisoft – Designer/Writer – 1999 - Present

The Save Game interview format was originally developed for www.gameshadow.com as an antidote to the objective rather than emotional language with which we usually discuss interactive entertainment.

Email ThisBlogThis!Share to TwitterShare to FacebookShare to Pinterest
Labels: interview, save game