Jenova Chen first came to public attention with Cloud - a free download in 2005 following a soaring child interacting with a the clouds in a surreal dreamscape. Jumping on that success and founding thatgamecompany, Jenova's team moved into a three game deal with Sony which has seen similarly inventive and zen-like offerings fl0w and Flower released on PSN, and which will culminate with this year's Journey.

Hi Jenova. There's not a lot of writing in your games, and yet you clearly put a lot of stead in expressing drama and - to my mind most successfully - evoking emotion in more fundamental and perhaps less immediate fashion. Is the absence of words a conscious decision, and if so why?

I decided to do that mainly because I had a hard time at my screen writing class in the USC film school. While I did manage to earn an A in the end of the semester through some ridiculous amount of work, I realized that I can’t really write solid dialogs considering I didn’t grow up in the western culture and English is my second language. I can only write fictions, things that’s not heavily rooted in the local culture. So as a way of avoiding this problem, I figured it’s best for me to focus on things that is more universal, things that can cross the boundary of culture and language.

I remember playing Cloud on release. It seems to me the sort of time that the indie community was really starting to flourish on the PC. How has the community / market changed since you started out, and do you miss the PC?

It’s a time where online download-able game is only accessible through PC. And all console games have to be sold through retail, which adds a huge budget to the cost of a video games. At that time PC is the only way a small budget indie game can be distributed. Now the world has changed so much that every device seems to have an online access to games. And the distribution cost is so low now that anybody in a garage can make an iOS or Android games. I don’t believe the personal computer will exist in 10 years. We are in a post PC device era. So I don’t miss PC :)

Journey was well entrenched in my most anticipated last year, and it seems we're finally being drip fed some details. One thing I'm still slightly in the dark on is what sort of interactions two players will be having. Are they puzzle solving together? Are they simply there? 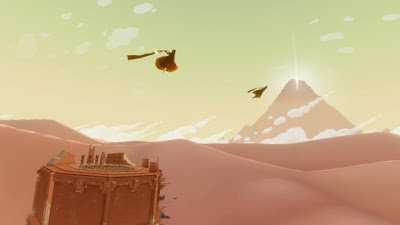 Journey is not a co-op game in which player has to work together to solve a puzzle. The other player is there more about sharing the experience. With that said, there is subtle benefits being close to the other player. In Journey player can recharge their energy by touching things made of cloth, so is the remote player. Veteran players probably would show you secret areas and short cuts they’ve discovered in the past.

Auteur theory. I know you've been asked about it before, but particularly in light of the recent LA Noire scandal (in which Team Bondi Boss Brendan McNamara uses his self-professed auteur status to justify appalling working conditions) I wanted to ask how responsible you feel for thatgamecompany's output, and whether you think the auteur has a place in our industry?

I certainly would support auteur theory, since that’s how Cinema evolved so rapidly from limited content controlled by big production studio into an indie film movement supported by a wide range of content and memorable names. While Mr.McNamara used that status to make everyone else work extra hours for him. At thatgamecompany we don’t encourage crunch time on our team members. Any extra hours are completely volunteered. As the director for the game, I felt obligated to putting the extra hours to make the game perfect. While I believe I work just as hard as Mr.McNamara, I don’t want to enforce others into a crunch without their own will.

For all the energy I expend on topics like emotion and drama I still let loose in APB Reloaded or Left4Dead 2 every once in a while. Which games are your guilty pleasures?

I still need a daily dose of games like Street Fighter 4, DOTA, League of Legend for my male competitive satisfaction. Recently I’ve been trying to follow up with the social games, I played Smurf Ville, Tiny Tower and Zombie Farm for quite a while.

Thanks for your time.

You can keep up with thatgamecompany very easily.
at 9:30 am