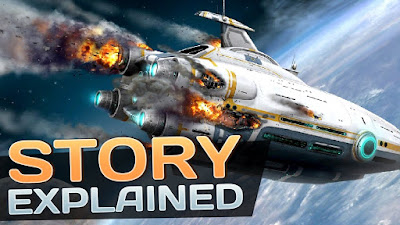 Subnautica is one of the hardest things I've written, for all sorts of wonderful reasons. The world is huge and open, so pacing is out the window. There aren't other people wandering about, but human characters are the most interesting way to tell a story. We have huge creative freedom and independence, and a passionate fan-base with firm ideas about what the game is.

I was asked recently if I could share some of my process on character development for it.

That's a bit like watching a man fall down a hill chasing a rolling cheese, then asking him at the bottom how he did it - it's a lot of pain, hand-waving and muscle memory - but I'll try.

Spoilers for SN1 throughout.

I'm going to focus on the Degasi crew. I dug up the earliest reference I could find to them in the story docs, from back in 2015, the summer I started.

Here it is in full:

The Aurora is not the first ship to be brought down by the planet's defense system. This part of space is far from any outpost and it is rare for ships to come this way. When they do, they run the risk of something going wrong and being stranded.

The planet's most recent victim was a small ship carrying an industrialist and his entourage, bound for a company mining operation. 2-3 of them survived the crash. Like the player they were infected, and sought a way to survive, which led them to establish seabases deep in the abyss. Unlike the player they never found the Sea Emperor, nor deciphered the interface on the defense system (clever player!) - but they did find a way to synthesise a substance that would slow the symptoms of the bacterium.

Truth be told, I am leaving this section more open than the others for now because while I have some ideas nothing is jumping out at me as best, and in my experience it's better to come back to it later when I know more about the rest of the story than to spend too much time on it now.

I don't think there will be any really 'big' idea here - no twists, no big concept to get player's head around. Rather it's character driven - we see the tensions that develop when people of very different character have different ideas about how to solve the same problems.

In the game I'd pencil in two habitats in different locations, plus a few story points dotted about the area (possibly well-hidden until you have picked up clues from the habitat). The story covers the survivors' journey down into the abyss, the effects of the bacterium, their development of the symptom-treatment, their subsequent arguments over how best to proceed, and their ultimate demise.

A future teacher
Of course, in the future kids are all taught by AIs, but someone has to set the syllabus
Unassuming, non-combative
Not super knowledgeable, not a scientist; but nontheless has that enquiring mind

An Ayn Randian entrepreneur
Competent, rational and wholly self-interested
Torn because on the one hand all those entrepreneurial skills are not useful in a survival situation...
...But also invigorated to demonstrate that what made them a successful businessperson generally makes them capable in any situation
Desperately wants to be in charge

Artist or other creative
Provides the more aesthetic, emotional voice?
How do we twist this arc though? Perhaps their artistic impression grows darker over time?

Game hunter
I just love love love the juxtaposition between player's environmentalist journey and this larger than life, Quint from Jaws kinda character
Writing survival stories has an inherent darkness to it, and characters need to express that feeling of isolation and fear...
...BUT I write a lot of stuff like that, and we don't want to take this game too far in that direction
SO Quint type character has the bonus of being able to describe somewhat dark things in a lighter fashion - he's a soldier-type, he wants to be in danger and he wants to prove himself. In Jaws Quint has been waiting his whole life to meet the shark that kills him. It's fate and he knows it (even if it isn't really).
This makes the character both an asset and liability to the others.
May not actually be a game hunter, but some related background (soldier, exterminator...)

I'd made a conscious decision that I wanted these characters, like Subnautica's creatures, to be just a little larger than life. They should be plausible, but like in a horror movie they should be recognisable as tropes too, and then subverted.

You can see in there that I began with background explanations for what these characters are doing on the planet, and what systems I would use to actually tell their stories. As ever there were more ambitious or nebulous ideas in there that got cut or simplified along the way.

I'd developed a barebones plot structure that I ended up sticking with and detailing out as I went, and some personality brainstorming that includes the base recipes for the three characters I ended up writing. I kinda miss Marguerit being a big game hunter! That woulda been sweet! But too Quint.

Ha, as I write this I'm thinking Marg and Paul should have been rolled into the same character, a super wealthy businessman and big game hunter, who came to the planet to fish the ultimate alien fish. It works so perfectly with the Bart character, it's a family fishing trip that goes horribly wrong, and they learn about each other in the process. I think at the time I was dead-set on having three-way dialogs because I hadn't done it in a game and it sounded fun.

If anything best describes my character dev process, it's the previous paragraph. I write about the characters, and ideas and images come to me. I know when I feel excited and curious enough to write them, and I hope that means people will be curious to read/hear/see them.

I did another round of development on these ideas to arrive at the next outline, and I think it was the only further work I did before I started writing them. You can see here I've more or less settled on names (I simplified them later so people could pronounce them), backgrounds, personalities and individual character archs - although there are still some ideas that didn't make the cut largely for reasons of space or tone.

It moves the plot forward or it's not worth it (redundancy?)


Why mongolians are here? Visiting a distant base? Dropping off the son and inspecting. Life is longer for these people. This is a gap year. And paal insists on controlling everything.


3 years ago a small ship from the Mongolian Empire was stranded on Subnautica by the defense system. Unlike the Aurora crew, four of the crew survive not only the initial crash landing, but long enough to establish habitats and routines, and to begin studying the alien life around them. The mongolians have been disconnected from society for much longer than the Aurora crew - they have all but abandoned whatever hierarchies existed onboard ship, and they are now rougher, more weathered, more cynical.


The story covers the survivors' journey down into the abyss, the effects of the bacterium, their development of the symptom-treatment, their subsequent arguments over how best to proceed, and their ultimate demise.


Focus: older characters are in an arms race to get the most of the natural resources; younger is rebelling and wants to live with nature.


Main Characters
Paal Torgaljin - Captain of the ship Degasi, and owner (manager?) of a charter transport company (arm of the mongolian corporation? Like a VP?)
Marguerit Maida
Bat Torgaljin

In a way I think there was a much deeper vision of how this story was going to play out than I implemented in the game. A person could write a novel about these three people surviving on 4546B, and I often find myself reducing entire plot points or character details to a single line to fit the constraints. The stories mean more to me than I am able to write, and I'm banking on the audience to fill in the blanks.

And at the same time, these aren't characters that I developed extensively. I don't know what they eat for breakfast until I ask myself the question. To tell a story that works in Subnautica I have to dip into the pivotal scenes in their lives, and just let them talk.

And then go back and edit what they said until it fits everything else.
at 6:22 pm