The Curfew: What It Means for Games 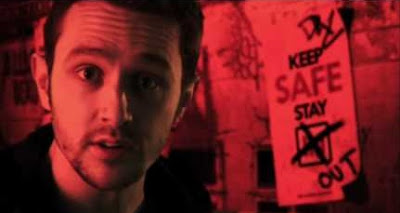 So, the first episode of The Curfew - Channel 4's free, political micro-game, developed by LittleLoud and scripted by Kieron Gillen - is out. After talking briefly with Gillen and C4 poster girl Alice Taylor, I was really interested to see what came of the project (not to mention drawn by the opportunity as a developer to critique a journo). It seems a bit crazy 'reviewing' an interesting free game that takes twenty minutes to play through, but it's certainly worth discussing its ambitions and delivery. There are three elements which really stand out as noteworthy for me.

Broad Appeal
The Curfew's mechanics, presentation and content are all geared around appealing to a broad, casual market. This isn't really best viewed as a game at all, rather it's a tool for encouraging political awareness that just happens to be interactive.

The main thrust in this direction is the removal of free movement. Combined with the simple point & click interface and use of live actors on CG backgrounds, the game sacrifices complexity for the almost-guarantee that your nan won't get stuck at any point. These sacrifices are, for the most part, not detrimental. The simplicity of the game's puzzles wouldn't bore unless stretched over a greater time frame; the subtleties of the unique dialogue system make up for the lack of options; and linearity is not something I would often begrudge.

I can absolutely see the reasoning behind the live actors, as well. The archetypal video game writing doesn't always mesh well with the real world looks, and performances are really quite awkward in places (though most of the central cast are yet to claim much air time), but I know from experience that acting and direction in these sorts of projects isn't easy, and cheaper development plus a visual style more familiar to C4 viewers can be no bad thing. For sure the three minigames in this installment are roundly atrocious, but they're also short and forgiving.

The game's ideal audience seems firmly in the casual teen / young adult arena, although C4 are pursuing significant broadsheet coverage in addition to telly slots. I suspect it still relies too heavily on unspoken videogame logic to be palatable to those of a certain generation, and while I hope it will encourage a whole new audience to take games seriously, it may prove a tough sell. Ultimately, though, the project's true success will be in demonstrating to the triumvirate of Farmville players, CoD kids and parents that interactive entertainment can be approachable and intelligent.

The Educational Aspect
The Curfew is one of a number of games Channel 4 has funded with money the station is required to spend on educational programming. The success of The Curfew, therefore, will affect more than just Channel 4's funding allocations - it makes a statement about what games can be in our society.

The game's message is... blunt. "Appreciate and protect your rights: don't allow government scare tactics to infringe upon them". Government propaganda is where Gillen seems to find most pleasure, and the assorted ads and TV spots are entertaining, if lacking subtlety. The truth is that he could have pulled right back and allowed the inventive and intelligent world design to speak for him. The gamification of society, the citizen ranks and censorship are all sharply developed and presented, and it's telling that the most interesting environment of the entire chapter is the Smiley Burger fast food joint where we're allowed to witness and engage with the world rather than simply be told about it.

It is, perhaps, far easier to identify the educational merit in the team's previous historical offering, Bow Street Runner. However, while there's hope further chapters might engage more thoroughly with the issues being thrown about, it feels like the real intention of the project was not so much to dissect the topics of liberty and government as it is to spur involvement and conversation amongst an audience that otherwise might see politics as irrelevant.

While the broadsheet readers are unlikely to find the same level of political commentary here they might expect from competing film or literature - this is no 1984 - this is no small step in the right direction. I've written before about subtext in games - or lack thereof - and everyone involved ought to be congratulated for daring to produce a game whose central selling point is not its visuals, nor the number of guns it has, but its heartfelt and topical message.

For me, The Curfew's greatest success in gameplay terms is its dialogue system, which forms a focal point of the entire experience - although anything that isn't a dialogue tree automatically gets points in my book. The goal you're set is to interview the four characters in order to establish who can be trusted with the vital data capsule in your possession. Dialogue outside of main interactions is standard fare, and even the central conversations - in which you're able to ask a series of three questions - are simply presented.

Despite this, you may be surprised just how much the experience is rejuvenated by the need to actually consider which questions you ask based on genuine, common sense considerations. Gone are endless euphemisms for 'Tell me more', there are no transparent 'good', 'neutral', 'evil' paths; it's all a case of directing the conversation in order to work out who's reliable. Asking the boy whether he's used tags (a sort of virtual message board) before, you're required to justify your question - if you just wanted to know a bit more about the world you lose points; concern over his expertise wins them.

The system isn't brilliantly explained - it's unclear why asking probing questions gains their trust, or to what end you'd want it - and once you get the hang of it it's pretty straight forward stuff; but it never felt unfair. The simple fact that the dialogue system presents a challenge renders it (potentially, if the complexity was scaled up) more engaging and more real than any we've seen in a Bioware product.

In Closing
Reading back through, I've raised a lot of negatives that perhaps make it sound as if I didn't enjoy The Curfew. I did. More important, though, is what it represents. It represents the beginnings of interactive entertainment as an accepted form of intelligent expression. LittleLoud, Kieron Gillen and - perhaps most of all - Channel 4, deserve all the support we can give them.
at 8:44 pm