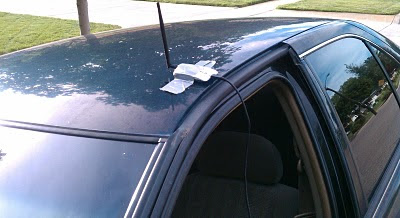 Quick one this. Since I started tweeting (BTW, follow me, natch!) I've barely had time to read a thing on it - and I'm only following 50 people; I think that's going to prove my cap. This said, I'm thoroughly glad I got on there for a number of reasons:

- A* for networking (with studios, other writers and, of course, the ever lovely consumer)
- Posting little things that aren't worth a blog
- Not talking about what I had for breakfast
- Finding things like this

Bitch_Slap_Vengeance's reddit post is now numbering in the thousands of replies as he documents blow by blow his attempts to reclaim his stolen computer using Logmein to take control of the PC in the thieves' home - this was just so worth a blog instead of a retweet. So far he's got everything including MySpace details, and has wound up going on a 'wardrive' to identify the culprit's house. Quite what he must have looked like cruising through a dodgy neighborhood with that thing strapped to the roof I don't know, but time will tell.

Incidentally, while I'm on the topic of Twitter, here's the observation that finally made me realise it was 100% worth getting sucked in: if you want to get in touch with someone important, email, LinkedIn or any other option is very direct; with Twitter, you can reply something intelligent to something that person has said, meaning they'll get familiar with your name as it pops up in their feed, and you're more likely to garner a response because of the casual nature of the enterprise - it's networking in a can.
at 12:46 pm