Stories in Unlikely Places No.3: Cryostasis

Crostasis is an ambitious Ukrainian development whose limited implementation belies its thorough understanding of how to tell a creepily effective tale.

This is part of a series of posts aimed at celebrating and championing the games that further our understanding of interactive narrative. No serious spoilers.

This column thus far has found itself focusing exclusively on older games whose narratives were under appreciated when they first came to bear, so with that in mind I present you Cryostasis - a 2009, Condemned-style survival shooter that probably looks like it's not especially worth your time. The game positions you as a scientist stumbling across the wreck of a Russian nuclear research vessel grounded in the arctic, your goal being to discover just what went wrong, and why the hell everyone's a zombie now.

The first example of the metered approach to design that Action Forms applies throughout the experience is in the ranged combat: it's rubbish, but that's because this isn't really a shooter, it's an atmospheric game of exploration. Its USPs sound exciting but prove to be much more stripped down than they might have been. Modelling temperature as a crucial survival resource could have been inventive, and the moments that mirror Dead Space's haunting zero G scenes - where you fight your way out into the blizzard, surviving moment to moment on the fleeting respite of a hot air vent or partially destroyed cabin - are atmospheric and rewarding; but for the most part all this marketing talk just means the health bar's replaced with a thermometer; med kits with fires, heaters and even desk lamps. 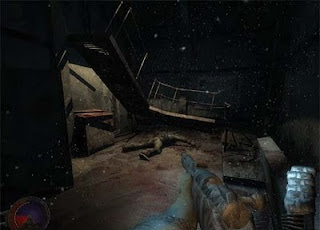 Of greater narrative interest is the MentalEcho ability. Cryostasis builds most of its challenge around environmental puzzles, many of which revolve around the protagonist's ability to embody the mind of a dead guy, go back in time and change his actions in the past in order to effect the present. Again, this has some really inventive gameplay applications (eg posses the stuffed polar bear that's locking your path, then go back in time and save it from the captain's hunting rifle, leaving the path in the present day clear), but they're completely linear and for the most part it's 'Go back to when this guy broke this ladder and, you know, don't.' However, much like games such as Tribes: Vengeance or Second/Sight, less demanding gameplay and a more linear narrative can allow the creative wiggle room for some serious story fireworks.

Cryostasis relates three different, interrelated tales. The first is the most minimal: the active story of the protagonist. Frankly beyond the opening and the conclusion this story amounts to 'Guy trudges through boat, reads some shit.' The next is the eerie Russian fairytale of hero worship and lost faith that acts as foil to the core thread: the discovery of just what went on on the ship in the previous weeks.

These flashbacks tend to be non-interactive, you a ghostly spectator to events whose catastrophic outcomes have already unfolded. The story itself - of mutiny and fate - is nothing too out of the ordinary, but the structure is captivating: too few are the games which understand that the audience often needs a perspective broader than the confines of a corridor and gun barrel. Gradually the scraps of correspondence, scenes of tension in the crew quarters, altered histories and allegorically deformed sailors come together at a single, crucial point in time; finally a point where your actions may have an impact that reaches beyond the next locked door.

Also you fight the god of time. But that's enough of that.

The conclusion is satisfying (that alone is a rarity), delivering on all the dramatic loose ends the devs have sewn throughout the last eight hours, and even the end credits are touching and wistful for the experience you've just shared.

Not that I'd guess it was an inspiration, but there are definite Penumbra vibes at work here: the atmosphere of isolation; the focus on survival, exploration and puzzle solving; and the philosophically inspired backstory. That and the rubbish combat. The developer's site is down as of right now, and they've not been very chatty since this game's release and the formation of a phoenix dev team.

I for one would like to give this game a last breath of life.