It's not a top ten list! Seriously though, it kind of is, even though there are fifteen games on the list (I think... last time I checked). This blog will continue to be about the pretentious / thought-provoking [delete where appropriate] arty, narrative-oriented things it has been for the last month, but everyone deserves to get excited about some big games sometimes :-)

So. These are the fifteen commercial games that I think are going to do the most important things with interactive story telling over the next 12 months or so. I hope you'll spot some surprises, because otherwise what's the point?

PS I'm bullet marking for your sanity rather than mine. Give me a blank word doc and I'd give you 10,000 words on this lot. 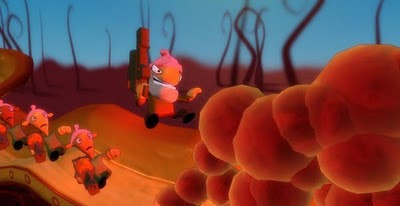 WTF is it?
A 2.5D shooter financed by the UK's own Channel 4, developed by the Ben Here, Dan That chap Dan Marshall, and aimed at teenagers who don't know enough about STDs.

What's mind-bogglingly intoxicating?
- It's a thoroughly British comedy from the guys who made the excellent (though very point n' clicky) Time Gentlemen, Please.
- It's edutainment that actually has a chance of being both educational and entertaining. Seriously, this could be the first cool example of the genre ever produced.
- Developed using part of the budget Channel 4 legally has to devote to educational programming, it's a toilet humour shaped flagship for video games as a fully fledged element of mainstream culture.

What's a little bit disquieting?
- Nothing, save for the fact that Privates' existence and financing is probably doing more for games than the game itself will. It is about 'BRITAIN- land of Hope and Glory-holes' after all.
- Oh, and there's a reasonable chance it won't make it to Xbox Live because - oh noes! - it's got genitals in it. Also that article I just linked to is headed 'Xbox joysticking unlikely for game set inside vagina'. Which is either very funny or very sad. I'm hoping it's both.

WTF is it?
Legendary story-driven RPG developer Bioware's first foray into the MMORPG.

What's mind-bogglingly intoxicating?
- It's being billed as the first MMORPG to focus on providing a narrative experience as complete and atmospheric as a singleplayer RPG.
- To my mind, since the original KOTOR, Bioware's games have advanced in presentation but fallen behind in the complexity of their interactive story telling. Perhaps other players are just the twist the formula needs to do something exciting.

What's a little bit disquieting?
- It's still an MMORPG. Time will tell whether the attention the devs pay to the story will be matched by the players, or whether affairs descend into another grind party.
- "It has more story content than every single other BioWare game that's come before put together." As soon as a game's lead designer starts talking about word count as a selling point I get a little scared - though I'll give Bioware the benefit of the doubt.

If you don't mind my utterly shameless link exchanging, and you're a fan of online space games, you could always take a look at Battlestar Galactica from browsergame specialist Bigpoint. They'd love for me to helpfully inform you that they also do online games in other genres: fantasy games, sim games and - inevitably - a farming game. Whew, marketing is hard. 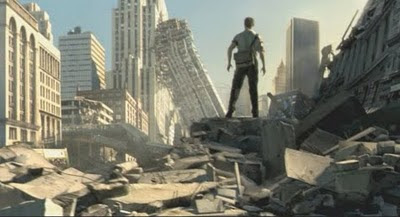 WTF is it?
Darkworks' maligned and delayed apocalyptic survival-FPS, now in Ubisoft hands.

What's mind-bogglingly intoxicating?
- The plausible disaster movie scenario (a major earthquake in Chicago) puts the narrative emphasis on actions we can all identify with - finding loved ones, pooling resources, in-fighting with other survivors - rather than on salting space slugs.
- It's now in the hands of Ubisoft Shanghai, who proved their competence with Splinter Cells: Pandora and Double Agent.

What's a little bit disquieting?
- It's seen massive delays, changed studios and largely gone off the radar. If it weren't for this statement at the start of the year I'd be issuing a very stern VAPOURWARE ALERT.
- Since the premise wasn't established by its current developer who's to say how closely Ubi will stick to the script? There's a good chance we'll be looking at a uniquely framed shooting gallery.