So, you may have noticed the blog's been a little quiet over the last week. That's not because I've been avidly watching England be almost as shockingly bad in the world cup as France - it's because I've been in Sweden, and I'm just not the sort to sit down at a a laptop while I'm on holiday.

Given Sweden's entire population is smaller than London's, its flourishing games industry is something of a miracle, so naturally there's been some business going on as well, but for the most part I was staying with Swedish friends for a week of healthy eating, exercise and extreme left wing politics - not my thing at all, which is why it's been such a valuable break. 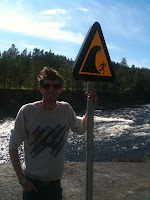 As much as I enjoyed my time, however, I can't say that getting back to the UK and our more cynical, less sheltered world view wasn't something of a relief, and it reminds me that in terms of cultural identity games are still very much in their infancy. When we look at other artistic mediums it's often very hard to separate a work from its creator's national identity - important topics are tied intimately to their creator's voice, and that voice is necessarily a product - to some degree or other - of the creator's background. Even traditionally lowbrow Hollywood output is inescapably American.

Games, on the other hand, exist in a faintly ludicrous middle ground where appealing to the US market is often paramount. This results in surprising (though impressive) syntheses of culture such as the American hyper reality of the British-developed GTA series, or the multicultural minefield of the Penumbra games (a Swedish series written by an Englishman, paying homage to an American writer, who in turn was pastiching English literature).

With these things in mind, it's important we heap praise on initiatives that reward games with cultural identity, such as the Nordic Game Program, and snap at the heels of MPs putting the kybosh on similar efforts in the UK. What's more, we should better recognise the few games that offer such cultural insights and realise that good stories and fun gameplay aren't the only things that can be valuable about an interactive experience. If you've not done so already, you might like to check out the following:

Theme Hospital - Developed 20 minutes from where I grew up in good old Surrey, England, Bullfrog's wry tannoy announcements and casual dismissal of the NHS could not have been more self-deprecatingly middle class Britain.

Beyond Good & Evil - Despite featuring an American-voiced central character in an alien version of Venice, Jade and BGE could not have been more French. From her garish green lipstick to her punky, counter culture problem solving, Ubisoft IP generator Michael Ancel clearly knew how to trick a US audience into enjoying something distinctly European. I can forgive that the game's named for no reason whatsoever after a groundbreaking piece of philosophy.

The Sims - While the Hollywood excess of the Halos of this world may comfortably represent typical US output, it's surely The Sims series that most represents the American (and, perhaps, Western) way of life. Consumerism and soap opera at its absolute best.

Cryostasis - A middling survival horror with an unambitious but structurally inventive narrative whose Ukrainian developer relishes its Russian folk tale origins.
at 8:37 pm