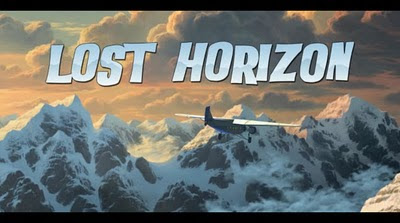 I realised this morning that although I've been doing this job almost four years and worked on nine (nine!) games, the unfortunate fact of long development times means that I've still only had three released, all in the same series. It's strange that in my head I've worked across a load of different genres and formats, on everything from browser-based MMOs to AAA console fair, when all you guys know me for - quite fairly - is Penumbra.

That's about to change. Lost Horizon (trailer) is the new point & click from Animation Arts, the guys behind the Secret Files games, and ahead of its 20th August release date, hands-on previews are flying in.

The Good
The game itself is a beautiful thing of hand drawn backgrounds and cunningly implemented action, set within a tongue in cheek adventure movie. Expect the first reviews to be arriving in the next few weeks, but in the meantime here are some choice preview quotes:


"Lost Horizon just doesn't seem to have a weakness at all and this is one title where I can’t wait to get my hands on the full version!" Twitchy

"The story so far seems to be quite interesting[...] it has a kind of Indiana Jones charm to it, think wartime bars, cabaret singers, and a similar brand of humour. Characters are genuine and believable with some good voice acting." Game On

While I couldn't in any sense call Lost Horizon a 'Tom Jubert story' - in the sense that I only produced a treatment of the original German script, and wasn't involved in casting - I do hope there may be some identifiably me-ish elements to it. While the broad and, sometimes, downright odd humour is not strictly my style - games writers can rarely afford to pick and choose their projects to perfectly match their voice - I do hope lines like "True British workmanship: we can make an indestructible crate, but we can’t make trains that run on time" bring a personal note to the English version of the game.

The Bad
Of course, nothing is ever universally successful, and in keeping with my genuine intention for Plot is Gameplay's Bitch to be as candid as possible, it would be remiss of me not to also quote the only bad preview I found:


"This point-and-click adventure, which has been in development and getting genre fans excited for some time, features – quite honestly – some of the most atrociously bad dialogue I’ve seen in a game for ages." Beef Jack 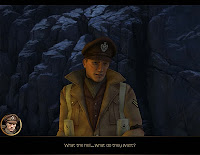 The Interesting Subjectivity Bit
I could sit here and explain how challenging it is to work within the limitations of a polish job, but the funny thing is I think both the resoundingly positive previews and this one excessively negative example are probably all correct, in so far as art / entertainment is subjective. Lost Horizon is an unapologetic Indiana Jones homage. It's also a game that - quite consciously - doesn't always strive to avoid traditionally ludicrous puzzle scenarios. It won't appeal to everyone. I think Greg Giddens of Resolution Magazine nails it when he says:


"The audience this genre appeals to is specific, and the majority may find the pacing too slow and the experience too dull for their liking. It’s an inherent issue with point and click adventure games that is rarely countered, however, if you can embrace the genre’s style, Lost Horizon will pull you in with its interesting and well rounded characters."

There is such a thing as good and bad when it comes to writing and art: you can try to deliver something and fail. In all other senses, though, what is considered 'good' writing tends more so to be writing that appeals to those with the louder voices: the critics, or the academics, or sometimes the mass market. Writing, in truth, is only as good as the reaction of the person reading it.

No game save for ir/rational has captured exactly what I would do given a blank slate and a budget - that's a luxury reserved for studio founders and novelists. With Lost Horizon I just hope that given the scenario where the player has to manufacture a no-photography sign by drawing a banned symbol onto a camera poster using a bottle of ketchup, the appropriate response, for better or for worse, is:


"Some might say using ketchup to manufacture the 'banned' symbol was unnecessarily convoluted. I say 'Do YOU see any red felt-tips around here?'"