New From Molleindustria: Inside a Dead Skyscraper 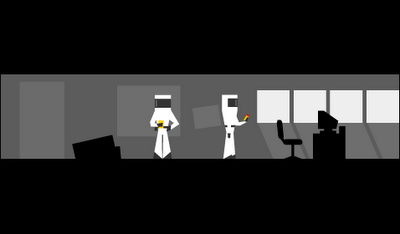 I know, I know: more Moleindustria. What can I say, when you've just had an interview go up on RPS in which you plug your blog, and you realise it'd be quite nice for any newcomers if there was a fantastic, free indie game on your front page that hasn't already been covered by the fantastic chaps over yonder, Paolo Pedercini's usually a safe bet.

Inside a Dead Skyscraper would be thoroughly ruined by reading pretty much anything about it, save for this paragraph and the quote below it. The experience is being billed as an interactive music video. It's a concept I'm all in favour of: new ways in which to enjoy and combine music and interactive entertainment; approaches which, rather than awkwardly ignoring the radically different formats we deal with today, are designed around them. Paolo puts it rather well in the game FAQ:


"Ideally, [the game] is meant to be a critical answer to the proliferation of rythm games 'a la Guitar Hero. These karaoke-derived products simply capitalize on already successful music[...] An alternative approach to the musical game form would link the independent music and independent games scenes. Indie music games could promote unknown bands to the multi-tasking, hyperactive, interaction-addicted new generations. They could enhance the listening esperience while being autonomous works as the best music videos have been done in the last 30 years."

That's your lot, SPOILERS FROM HERE ON OUT. Go play the game, why don't you, it has my official you-absolutely-won't-regret-the-three-minutes-it-takes-you sticker. But do come back.

So, that moment ten seconds in, huh? And again when you finish? Put aside the great aspirations this project has for interactive music as a whole and those revelations alone are worth the price of admission.

If I had one major criticism of the experience, it would be that the jump - or the initiation of the dream state - comes too soon. The impact, the liberating dichotomy of the two worlds, could have been far greater with just 30 seconds of trite greyscale fetch quests first.

I'd be interested to hear in what order you experienced the game, and how that affected what you came away with. Personally, I did a good minute or two of aimless flying, figuring given what this was meant to be there probably wouldn't be an awful lot more to it: the ace had been played when I escaped the building. I flew over the top of the second tower, observed the frozen people and assumed they were pointing up at me, and then landed on the third tower. It was only then that I realised what the gadget did, and I flew back to read the thoughts of the other peds. It was then, a good 5+ minutes in, that I found the plane. I restarted to read the rest of the thoughts, solved the red balloon 'puzzle', and finished up.

Discovering what people were thinking was fantastic, though if he didn't constantly surprise me I'd guess Paolo and musician / World Trade Centre photographer, Jesse Stiles, had taken a little influence from REM's Everybody Hurts video. But the thoughts seemed to reflect on the - somewhat familiar - themes of the song, as well as working towards an understanding of the gameworld itself.

And when that understanding hits. Wow. Playing through again, I was actually surprised the plane is there from the very start - I'd expect it to be spawned later to encourage exploration. I can only imagine the impact of finding the plane ten seconds after launching off detracts from the experience massively. As it was, I spent a good time exploring first, and the moment of revelation - when you understand the people aren't just static, but frozen in time, when you understand why you're there in the tower in the first place and the nature of the world you now have to return to - was spectacular.

I'm absolutely in love with the art style, especially with the truly liberating flying / swimming animations and the way the gadget when activated is brandished almost as an afterthought by the character - a truly laid back fantasy that only reinforces the oxymoron of the conflicting worlds.

Most of all, though, I'm impressed with how sharp and dramatic a story the game tells through its cunningly simplistic interaction and narrative structure. That this is done within the context of furthering the relationship between music and games doesn't just tip the balance, it crushes the scales.
at 2:45 pm