WTF is it?
Ice Pick Lodge's radical departure from the morbidity of Pathologic and The Void, Cargo! (damn these people and their ugly punctuation) looks to be a (slightly) more traditional action adventure in a world based, quite literally, around fun.


What's mind-bogglingly intoxicating?
- Ice Pick Lodge are, to my mind, at the forefront of the small list of developers producing truly ambitious, coherent, meaningful experiences in full commercial development.
- The new thematic direction is a surprising twist that would tend to knock a game into Nintendo territory. That the studio's reputation guarantees there'll be more here than meets the eye makes this all the more fascinating a prospect.

What's a little bit disquieting?
- We don't know too much about the game yet, and it's due very soon indeed.
- So far, Ice Pick's games have tended to gain polish and lose complexity as they move forward. Cargo! seems unlikely to entirely shift this direction, but let's hope it can find a comfortable balance between accessibility and artistic merit. 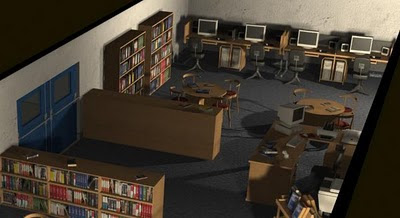 WTF is it?
ZRPG is the code name for the first project from Brian Mitsoda (Vampire the Masquerade: Bloodlines) and Annie Carlson (NWN2: Storm of Zehir). It's a lowish budget zombie RPG that - unlike Resi and its ilk - focuses on the realities and the human struggle of the inevitable undead apocalypse, rather than the headshots. I kinda hope you've never heard of it, and more so I kinda hope you won't forget about it.

What's mind-bogglingly intoxicating?
- With time at Black Isle and both its offshoots (Obsidian and ill-fated Troika), Brian Mitsoda's writing credentials are second to none. (Incidentally, his Malkavian character in Bloodlines was no small influence on Red in Penumbra: Overture, and it's well worth playing the game back through with that class if you didn't the first time.)
- Zombie games always get zombies wrong. Zombie films were never about the zombies, they were about what you do when your best mate gets bitten. They were about where you'd hole up if it came down to it. They were about taking humanity and putting it under the greatest possible strain just to see what we're really made of. ZRPG gets that.
- And, yes, it's far enough up in the list that it has to have procedural something. In this case, I don't know quite how dynamic the whole game will be, but the intention is to provide a world that players aren't trying to 100%. Companions are voluminous enough that their deaths are acceptable losses, but valuable enough that you'll never feel happy about it. Decisions are of the real, everyday variety, rather than the 'Save the elf for the reward or kill him for the loot' approach. In short, it's exactly the zombie game we've been missing all these years.

What's a little bit disquieting?
- While visually the game's reassuringly scaled back, on a technical level it sounds like a huge undertaking for even a large team. For what has so far remained a largely two man band let's hope this doesn't prove another STALKER.

I'm such a tease: I'm saving the number one reveal for a fresh post. It'll be a big one, so I hope it's worth it, and I really hope it comes as a surprise. Answers on a postcard - there might even be a prize if anyone gets its right.  Watch this space.
at 12:21 pm